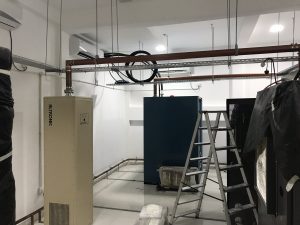 We wrapped up the year 2019 with the completion of a new Medium Wave transmission site on the remote island of Thilafushi in the Republic of the Maldives under a contract with Radio Frequency Systems (RFS) Australia. Initially this looks like an ordinary tower site on a beach, but Thilafushi is actually a man-made island built on top of a landfill. The end customer was the Maldives state media provider Public Service Media (PSM). Kintronic provided custom, wideband MW phasing and matching networks for the two-tower directional operation on 1449 kHz at 25 kW transmitter power. The towers are triangular, series-fed, guyed towers with overall heights of 53.3 meters. The whole system was designed for DRM compatibility.

Kintronic Labs provided technical support in the design of the RF ground system; the physical and electrical design of the towers; the site layout 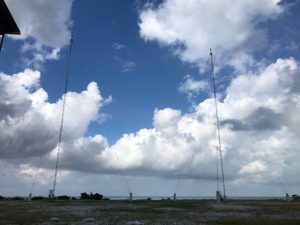 defining the location of the transmitter building relative to the two-tower array; the design of the directional pattern as per the customer’s direction; and the final antenna system adjustment, full power testing, and pattern proofing. 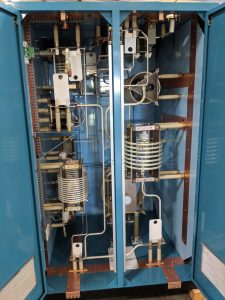 Following final adjustments of the antenna system, the resulting input impedance VSWR was < 1.4:1 at 1449kHz +/- 15kHz, which conforms to the contract requirement to provide single-channel, DRM-compatible performance.

Posted in AM Products, Installations and tagged AM Antenna Systems, installation, Project.