In 1949 Louis King, founder of Kintronic Labs, resigned from his position at the Radio Corporation of America as an AM high power transmitter design engineer to return to his birth place of Bristol, Tennessee to pursue his love of radio frequency(RF) antennas and components. Shortly after he returned to Bristol with his wife, Elizabeth, and two children, he obtained his PE license in Tennessee and Virginia and established a new business location as a regional broadcast consulting engineer in office space provided by his father, Arthur King, in his real estate office. 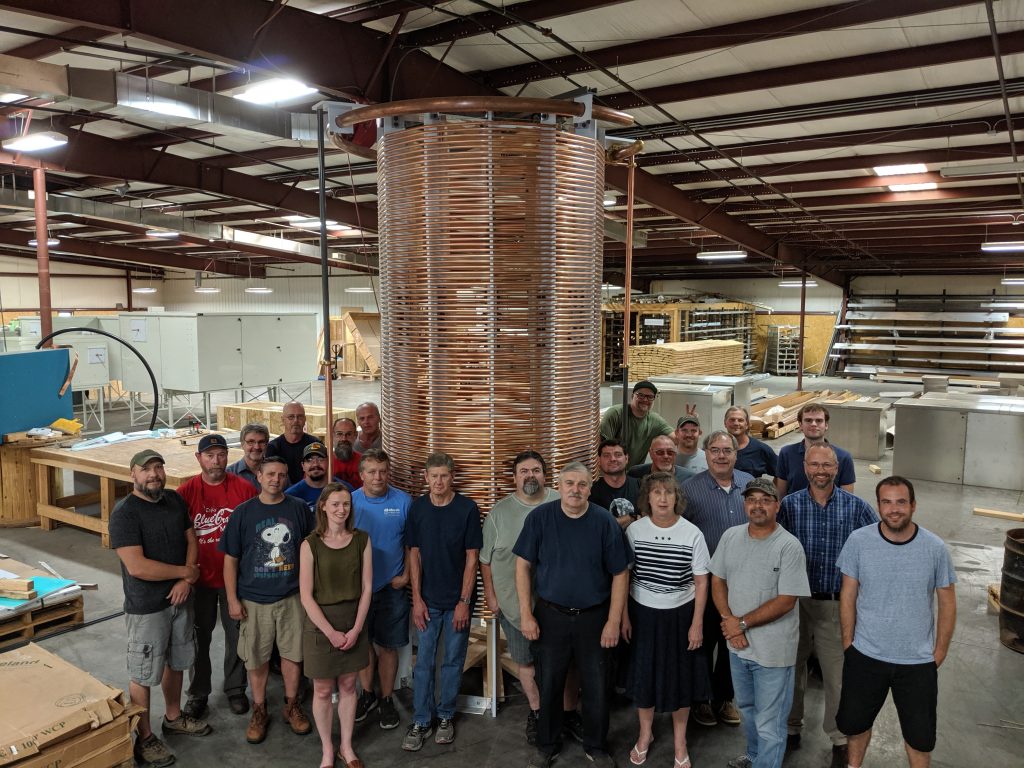 In the early 50’s Louis started designing and manufacturing FM isocouplers and AM antenna tuning units using inductors manufactured by E.F. Johnson and capacitors manufactured by Sangamo. He hired two Army veterans that were employees of his father, Boyd Wright and Earl Tolliver, who he trained to oversee manufacturing and field service, respectively. He outsourced the metal cabinet works and the painting. In the mid-fifties he manufactured his first directional antenna phasing cabinet and discovered much to his disgust upon completion and testing that the cabinet would not fit through the door of the room in which it was fabricated. Thirty years later I made the same mistake on one of my early phasor cabinet designs in which case we had to lower the cabinet into the customer’s transmitter building prior to the installation of the roof.

During these early manufacturing years of Louis King’s business, he was also providing broadcast consulting services and was involved in the preparation of AM license applications and directional antenna Proofs of Performance for many clients in the southeastern US. It was in 1962 that Louis consulted with myself and other family members to arrive at the company name of Kintronic Laboratories.

As a broadcast consultant Louis enjoyed working with such esteemed Professional Broadcast Engineers as Bob Silliman, Ogden Presthold, Bob duTreil, John Mullaney, Palmer Greer and others. He would often leave our home around midnight to work on transmitters that were off the air, and I said to myself at the time that this was not a profession that I would want to pursue due to having to work through the night often times. Well, I like Dad have been very thankful for the many friends that have truly served as my mentors and sources of encouragement in the broadcast business, and I have no regrets for having eventually gotten into this business as a result of the persistence of my Dad.

A Video Tour of Kintronic Labs

By the early 60’s Louis’ business grew to the point that he had to seek a facility with more manufacturing space. It was at this time that he moved to a rented building located at 801 English Street in downtown Bristol . As a result of the discontinuation of E.F. Johnson’s inductor and RF contactor production, Louis undertook the design of fixed and variable inductors and RF contactors working with Boyd Wright and a new machinist, Bob Seats, while striving to improve the design of the E.F. Johnson inductors by changing the frame bars from a straight design to a bowed design to conform to the inner radius of the inductor winding to make it easier for the field engineer to adjust the inductor without scratching up his knuckles in the process and by changing the round contact pins on the E.F. Johnson contactors to a rectangular design to facilitate a more robust, larger surface area contact between the contact bar and the finger stock in the contact holder. Louis also developed a superior roller contact design for 20 amp variable inductors resulting in increased surface contact between the roller assembly and inductor winding, which served to eliminate arcing and pitting under power. The ultimate impact of these design improvements was a more reliable and user-friendly AM antenna system.

In 1977 Louis signed a contract with Gates Radio to provide a 3 x 100kW AM triplexer for installation in Rio de Janeiro , Brazil . This was the largest project that Louis and Kintronic Labs had endeavored to produce up to that time. Prior to that time the company had been relying on bank loans to keep their operation running. Upon completion of this high power AM project Kintronic Labs was out of debt and has maintained a positive cash flow since that time. It was around this time that Louis discontinued his broadcast consulting business to devote his full time attention to the manufacturing of broadcast transmission equipment.

In the late 70’s Louis worked with a manufacturer of inductorless wire-wound resistors to design and develop a series of convection cooled and forced air-cooled transmitter test loads for carrier powers from 1-50 kilowatts plus 125% modulation. He later developed a 100kW and 200kW load designs based on the successful launch of the lower power loads.

Up until 1982 Louis completed all of his antenna system designs using a slide rule and tabulated data. In 1982 Ron Rackley, PE, left the firm of Jules Cohen Broadcast Consultants in Washington, DC and became the first full-time engineer employed by Kintronic Labs. With the advent of the handheld calculator followed by the introduction of the Radio Shack TRS8o personal computer and the BASIC programming language, Ron was instrumental in getting Louis into the computer age and the design productivity of the company increased many fold. One thing that I learned from Ron during his time with Louis was that Louis was always ready to accept any challenge presented by a customer agreeing to provide a solution without knowing what that solution would be at the time. He would get off the phone, and they would look at each other and say “how are we going to do that?”. Dad would say, “ Well, I got my tail in a trap again”, but the amazing fact about Louis was that he would find a solution to many challenging problems, and he grew his business as a result of this can do attitude.

Following one year in the manufacturing world , Ron decided to return to the broadcast consulting world with A.D. Ring Broadcast Consultants, and I left a career in military aircraft defensive systems development, test and evaluation and returned to work with Louis in early 1983. Upon my arrival at the company, my sister, Gwen, was in charge of drafting, my mother was in charge of accounting and Boyd Wright and Bob Seats were in charge of our manufacturing. At the time the business was booming, and Dad was working every day except Sunday morning when he attended the worship services at First Presbyterian Church where he ultimately became an Elder Emeritus. As a result of the stress brought on by his working habits, Louis had a stroke eight months after I arrived resulting in a discontinuation of his regular involvement in the company for approximately 2 years. I had thankfully learned enough about the business by that time and was supported by many very knowledgeable mentors in the broadcast community to enable me to keep the family business running. During this time we incorporated in the state of Tennessee as Kintronic Laboratories, Incorporated, and in early 1985 we moved to our present location in Sullivan County outside of Bristol where we consolidated our administrative and manufacturing facilities.

From the time that I became integrated into the Kintronic family our mission has been to provide the highest quality broadcast products in a cost-effective and timely manner while serving our customers with honesty and integrity. We know without a doubt that our company is what it is because of the grace and mercy of our Lord Jesus Christ. One thing that Louis knew to be true and that we as a company know to be true is that “Anything is possible with God.” He is the one that makes all things possible. 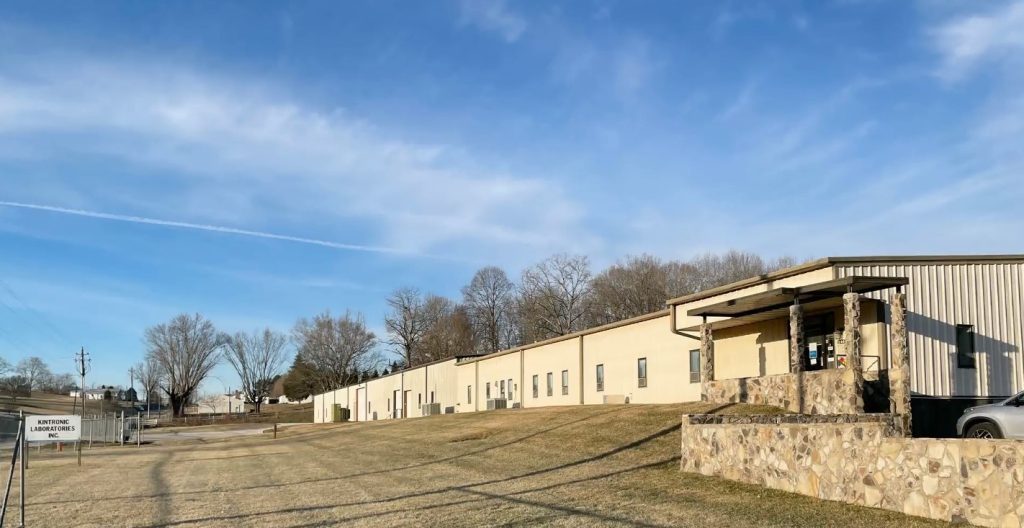 Kintronic Laboratories is a closely held corporation, incorporated under the laws of the State of Tennessee with offices and manufacturing facilities located at 144 Pleasant Grove Road in Bluff City, Tennessee. Our mailing address is P.O.Box 845,... 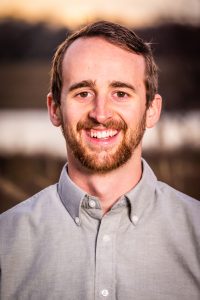 The combined talents of the Kintronic engineering staff provides you with over 150 years of Engineering expertise. Our customers benefit from our pioneering solutions to the future needs of the broadcast industry. Joshua King, CEO & President Joshua...

Joshua King is the grandson of Kintronic founder Louis Arthur King and currently serves as the Vice President of the company. He earned his BSEE at Clemson University in 2015. After graduating he worked for a systems integrator, Affinity Energy, in Charlotte,...