Our next Station of the Month is one that is very near and dear to our hearts here at Kintronic, because it happens to be right here in Bristol, Tennessee and celebrates the rich music roots of the Appalachian region that we call home. WBCM Radio Bristol is as much a community radio station as it is a dynamic exhibition of the importance of radio’s role in launching and spreading the bluegrass music genre all over the world. WBCM broadcasts its daily programming through a low-power FM translator that covers a ten mile radius around the Bristol TN/VA area, but reaches Bluegrass, Country and roots music enthusiasts in over 130 countries, from Brazil to Japan, through its online streaming.

Compared to the previous stations we’ve highlighted in this series, WBCM Radio Bristol is a new fixture to the radio scene, having launched in 2015. Originally, the radio station was just going to 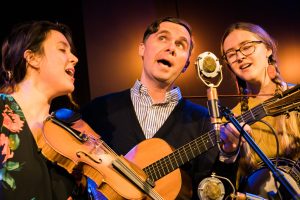 be a historical exhibit inside the new Smithsonian-affiliated Birthplace of Country Music Museum, which opened in 2014 in downtown Bristol, but considering the amount of talent and knowledge in the regional music community, this idea soon morphed into a full-fledged radio station. WBCM Radio Bristol Producer Kris Truelsen summed up their decision this way: “With the amount of talented yet underrepresented musicians in our region and the lack of fitting platforms it made a lot of sense to create Radio Bristol.” WBCM Radio Bristol is a genuine community station, built on the foundation of a crowd-funded campaign, generous donations of state of the art, yet historically accurate, equipment, and the expertise of industry professionals, all of which helped prepare Radio Bristol for its official launch on August 27, 2015. 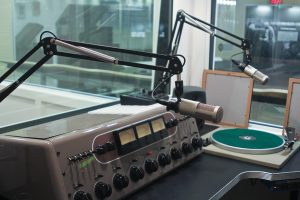 With its studios inside the Birthplace of Country Music Museum, WBCM is uniquely positioned to interact with the community and tourists in numerous ways, from hosting community-wide square dances to hosting the live radio show Farm and Fun Time, which is an adaptation of the program that debuted in the 1940s on the local WCYB radio station. This show is the perfect unity of live entertainment and old-time radio, with a modern twist of course, bringing together a studio audience and an engaging show featuring nationally touring musicians, jingles from house band Bill and the Belles, a farm report that highlights the important work of regional farmers, and an “Heirloom Recipe” segment (one episode featured a Black Walnut Pie). Truelsen remarked that, “It is really gratifying knowing we have revived an important piece of Bristol history.”

Radio Bristol produces an amazing variety of content for a small community station, and that is largely thanks to the majority volunteer DJs who themselves possess “a deep knowledge and respect for the music of our region,” says Truelsen. The diverse programming is both entertaining and insightful and dives into Appalachia’s deep roots from many angles. DJ JP Parson’s Appalachian Travels showcases local musicians, bringing in a few artists each week to perform live in the studio. For the history buffs and book worms out there, the Radio Bristol Book Club teams up with the local

library to discuss the cultural insights and observations found in the book-of-the-month. In the same vein, host Toni Doman’s Mountain Song and Story program brings in guests to tell stories from Appalachian folklore and traditions.

It is amazing that this small town LPFM station is reaching thousands of Country and American roots music enthusiasts across the globe. Through the WBCM staff’s extensive knowledge of Bluegrass, Country and roots music, they continue to craft programming that keeps listeners coming back for more. As Truelsen put it, “Our programming by design is unlike any station in the country. When you tune in to Radio Bristol you will hear the voices of Bristol and our region from past and present. We’re incredibly proud of our little station and believe it serves an important role in furthering and preserving our musical traditions.” WBCM Radio Bristol is one more example of how radio is being used to freely share information and entertainment to enrich our lives and our communities.